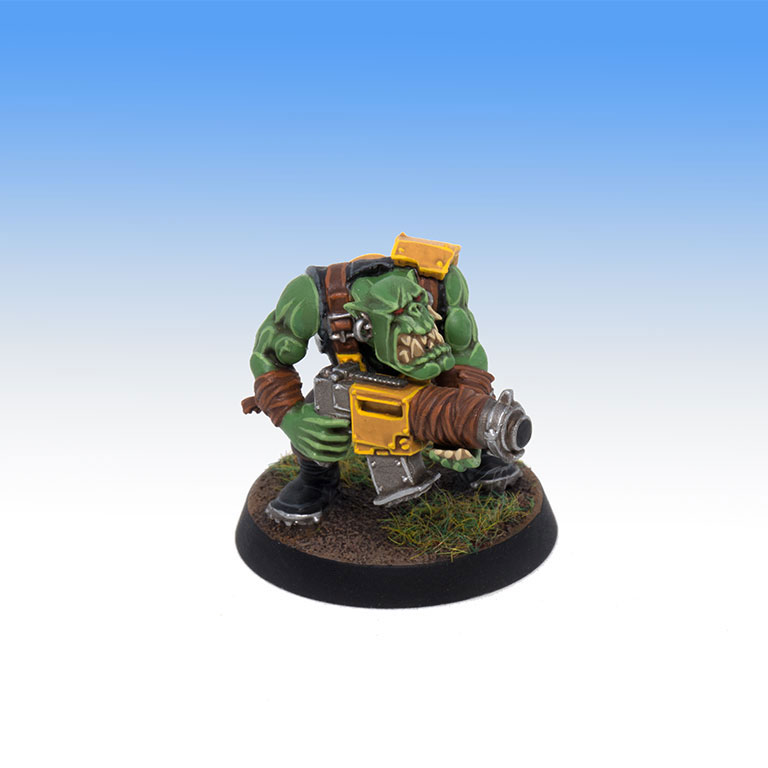 Bad Moons Ork Boy
Painted to our Tabletop level this Ork Boy is an example of the work we can complete for you.

Mephiston, The Lord of Death
As an important character this Mephiston Conversion was painted to our Character+ level to make it stand out on the battlefield.
Get A Quote

It’s safe to say that Grey Knights have been one of the weakest armies in the game this edition. Overpriced and underpowered they’ve struggled in all but the friendliest of settings. However, thanks to the points drops from Chapter Approved and the new rules from their Psychic Awakening book this could be all about to change. Here’s 5 new combos you’ll be seeing on the tabletop soon.

With a Stormbolter on nearly every model Grey Knights have always been good against hordes of infantry but have struggled to take down tougher targets at range. Thanks to the new Maters of the Warp ability and the Tide of Convergence this is no longer the case.

Masters of the Warp is the Grey Knights version of the Space Marine Combat Doctrines. At the start of the game you choose one of 4 tides to be in use which provides an army wide buff. You can then change this to a different tide during the game through the use of a Psychic power.

The Tide of Convergence is excellent for Psycannons and Psilencers but will also work on the humble Stormbolter if you use the Psybolt Ammunition Stratagem.

With the Tide engaged and Psybolts loaded your Stormbolters will be S6 AP -1 Damage 2. 40 shots like that coming from a 10 man squad will be able to put a dent in anything. You can even take this a step further by adding some re-rolls to hit, a Chaplain for the new -1 AP Litany and the Bring Down the Beast Stratagem.

With all of that combined you’ll be taking out an Imperial Knight in one round of shooting. Not bad for just Stormbolters!

For this one we’re going to be taking a Librarian with the Santic Shard relic which gives you +1 to cast and lets you re-roll Psychic tests aswell as the Inner Fire Psychic power. Both new additions from Psychic Awakening.

This power’s got a huge damage potential but is hamstrung by it’s 1″ range requirement. Luckily we can fix this by combining the Dynamic Insertion Stratagem which lets you place a unit deploying via Teleport Strike outside of 3″ of the enemy along with the Powerful Adept Stratagem.

You’re now going to be able drop in from reserves and fire off a Smite followed by Inner fire with +2 to cast and a re-roll. You can even take this a step further with the Empyric Surge stratagem for another +1 to cast and Psychic Channeling to roll 3 dice and pick the highest.

It’s definitely a suicide move for your Librarian but if your opponent isn’t screening heavily you can easily assassinate a key character. Sometimes all you need is the threat of that to dictate your opponents movement and swing a game your way.

How long’s it been since you saw a Land Raider on the table? Well with Grey Knights they might just make a come back! The new Tide of Shadows gives them, and the whole army, a much needed durability boost.

This one applies to VEHICLES aswell and there’s no 50% obscured requirement so it’s going to be really easy to have your Landraider touching terrain for -1 to be hit and a 1+ Armour Save. If you can keep it out of line of sight completely that’s even better as it’s a great target for Astral Aim.

From Nightspinners to Thunderfire Cannons and Basilisks there’s a ton of artillery in the game at the moment. Having something that can ignore line of sight and reach out and delete these is crucial for a competitive list and the Land Raider is durable enough to survive some return artillery fire while sat on an objective in your deployment zone scoring you points.

Want to take this up a notch? Combo it further with a Chaplain for the new re-roll damage Litany and shoot it in the psychic phase with the Edict Imperator power so you can spend your shooting phase popping Smoke and becoming -2 to be hit.

4: Return of the Deathstar

Paladins are one of the best units in the Grey Knight codex and with Psychic Awakening they’ve just got a whole lot better. Tide of Shadows has done wonders for their durability but there’s also a suite of new Stratagems and Psychic powers that will increase this further.

Transhuman Physiology is straight out of the Marine codex. It’s great there and it’s even better on Paladins with a 4+ invulnerable from Sanctuary or 1+ Armour with Tide of Shadows. You can then combo this further with the new Redoubtable Defence Stratagem which decreases all damage they receive by 1.

Finally they can also benefit from the new Armoured Resilience Psychic power which forces your opponent to subtract 1 from any wound rolls against them. This doesn’t stack with Tranhuman to make everything wound at best on 5s but it does work on attacks of S4 or lower such as the huge number of Stalker Boltguns in the game at the moment.

All of this combined causes a massive increase in durability for a unit that was already quite tough. Throw in an Apothecary for healing and bringing models back to life and you’ve got one of the closest things we’ve seen to a Deathstar in 8th Edition.

This is the one everyone’s been talking about. Grey Knights all have +1 to cast and don’t suffer negatives for casting Smite multiple times. With the new Tide of Escalation and a Strike Squad coming in as low as 85pts now it’s going to be very possible to build a list of Multiple Small Units along with a few key characters and put out 30+ mortal wounds per turn.

Thanks to the flexibility of how the Tide system works you’ll be able to either start in Escalation and then change to Shadow at the end of your Psychic phase if you’re going first or start in Shadow and then change to Escalation in your turn if you’re going second. This will keep your units around for as long as possible to maximize their Smite output.

All that’s left to do then is move forward in range of a Brother Captain’s aura and start Smiting things off the board from 24″ away.

This gets particularly monstrous if your up against a Chaos force with lots of units with the DAEMON keyword. At that point each Smite will be doing 4 mortal wounds per cast! Bye bye Possessed Bomb we barely knew you.

Clickbaity post title aside Grey Knights won’t be dominating the top tables like Marines currently are. The game’s hyper offensive at the moment so even with these new buffs the Grey Knights still have the same old problems of being an elite army of majority 3+ save 1 wound models in a meta built around killing exactly that.

What the new rules do give them is enough tricks, tactics and abilities to make a game of it where before they would have struggled. They’re certainly not a point and click army but with a skilled general at the helm they’ll definitely be able to be successful now. That’s a big win in my book!

Competitive rating: 4/5
Hype rating that Grey Knights are going to be seen on the table: 1000/10

What are your favourite parts of the new rules? Are you going to be dusting off your Grey Knights and getting them back on the table? Let us know in the comments.

If you enjoyed this article here’s a few ways you can support us: Check out our commission service and let us get your army painted and ready for battle. Place your next order with our affiliates Element Games using our referral link here. Share our posts and tell your friends. Thanks very much!